The law of tradition 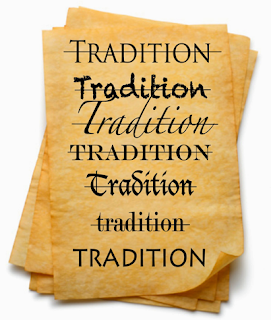 Every country, society, community or family is laced with some type of tradition. In fact, it is these traditions that are
manufacturing certain types of events in that particular group or family that’s also maintaining an anomalous behavior or logical outcome.

In today’s teaching, I intend to open your spiritual eyes as it relates to your walk with God and the religious institutions you’re connected to. We will further probe into the reality of some distinct challenges we face as Believers particularly, this seemingly freezes that has been placed on the manifestation and demonstration of God’s power in our lives and by extension our various churches.

I don’t know about you, but for some reason or the other it’s just not adding up to me. Meaning, everywhere you turn the religious jargons are seemingly endless such as, “The Apostolic anointing,” “Prophetic, Healing, deliverance, debt free and taking it back from the Devil conference” and of course the all too common one, “Break every chain conference.” I want to make clear it is never my intent to poke fun at these titles, labels or conferences. Instead, I am wondering if you’re observing and asking the questions I have repeatedly been asking and that is WHERE IS THE EVIDENCE OR MANIFESTATION OF THESE TITLES AND CONFERENCES, WHO ARE THE ONES THAT’S actually BENEFITING? How come we don’t ever read or hear about the many folks that attended these functions giving testimonies via the local Daily, Radio or Television or being healed from AIDS, Cancers, being debt free or at least some relief in their financial dilemmas or marriage being restored, etc.”,? Therefore, if God can not lie, then you must ask the question, “Is God really involved in these well-choreographed performances splashed with an array of high-tech graphics that mirror’ the flamboyant secular concerts that are hauling in millions of dollars per year?”

The reality is, I see more manifestation of what the secular concerts promise, such as they make it clear to the general public that your ticket will cost X amount which will include performances by so and so, food, drinks and a fabulous time. At the end of the concert if anyone of the attendee was asked how the concert was? They would say that they got exactly what was promised. In fact, while at the concert they’re texting, and sending photos as evidence of the delivery of what was originally promised. So why is it that “Prophet,” “Prophetess” and the like are having these well-promoted conferences promising that you’ll be delivered, set free, chains were broken and a list of other promises but again no manifestation and no press conference after the conference to tell the public what God has done? Could it be that God did not do anything because God was never invited?

Well my friend, indulge me for a few minutes as I unveil the spiritual law that you are either aware or unaware of that’s fostering this consistent disappointing behavior or outcome for the body of Christ. I would hope that after you would have been exposed to this revelation, you would make the necessary adjustments if you desire to witness the manifested power of God. For those of you that insist on holding on to what you know isn’t working for you, due to your commitment to the popularity of a religious person or group I advise you to take note of the following scripture, "Enter through the narrow gate. For wide is the gate and broad is the road that leads to destruction, and many enter through it” Matthew 7:13.

The word tradition is defined as the handing down of statements, beliefs, legends, customs, information, etc., from generation to generation, especially by word of mouth or by practice. In regards to religion it is a continuing pattern of cultural beliefs or practices handed down from their predecessor that has infiltrated religious institutions which for the most part in certain religious institutions, more emphasis is placed on their traditions rather than the word of God. This is important to note because we are about to discover three mysteries that have been hidden from the people of God for ages, that has been securing their defeat spiritually and as a result supervised the non-manifesting of God’s promises in their lives. The first mystery is; a law was activated, the second mystery is; the activation of one law disabled or suspended another law. The third mystery is a spiritual injunction has developed that has caused the word of God not to manifest what it has promised. Now, before we venture any further, make no mistake; God’s word not producing in one’s life does not mean there is a greater power against his word. Instead, it means that because he has placed his word above his name and his Word cannot return unto him void he must then abide by his own words, Psalm 138:2, Isaiah 55:11.

Regrettably, These traditions that have crept into our churches under the disguise of philosophies, church cliché, prophetic words, rudimental non-biblical teachings, has, in fact, mislead the people of God, causing them to believe that because it’s coming from a Pastor, Preacher, etc. it is of God. For example, why do you have to pay for a prophetic word from God? Did not the scripture say, Freely you’ve received, freely you must give, Matthew 10:8? It is in such cases where these non-biblical pleas are generated from some pulpits and spiritual leaders that are causing so many to go in the opposite direction of Christ and as a result not seeing his promises coming to pass. Let’s look at the warning the Apostle Paul had to say about this great evil, “Beware lest any man spoil you through philosophy and vain deceit, after the tradition of men, after the rudiments of the world, and not after Christ” Colossians 2:8.

However, Jesus pointed out an even more impressive set of laws, which I mentioned I would reveal earlier. In Matthew 15:1-9 the Scribes and Pharisees (who were at that time the leaders of the church) challenged Jesus by asking him, how is it that his disciples transgress (violate) the traditions of the Elders by not washing their hands before they break bread? Now, in Jesus’ response to these church leaders, he’s not just responding, but his response is indeed a law. Jesus said, “You have transgressed (violated) the commandments of God by your traditions. As a result, you have made the commandments or the word of God of non-effect by your traditions Matthew 15:1-3, 6. In other words here is what’s being revealed; because one places his or her traditions over the word of God, not only have they violated the word of God but at that very moment suspends the word of God from operating in their lives. In the laws of the spiritual world, this is called a spiritual injunction, where the violation of a particular law suspends the benefit that accompanies it.

I am saying to you; invest time into reading and studying the word of God for yourself. There are so many folks that ask to sit and talk with me concerning spiritual matters. They are very much attentive to what I have to say until I begin to give them scriptural references and books to read. At that moment I would have lost their attention because they are conditioned to accepting what a spiritual leader says without investigating or researching. This is why most spiritual leaders spew the spiritual jargon that they do. 1) because they know their followers will never follow up and research and 2) they feel that in spite of what they say whether it makes sense or not, they’re protected by the spiritual clause, “touch not God’s anointed.”

Therefore, whatever is being asked of you from your spiritual leaders (such as monies etc. ) or given to you (oils, miracle cloth, etc.)  from your leaders and the origin of their request or giving is based on a tradition, philosophy, cliché, spiritual jargon, etc. DO NOT PARTICIPATE! If you do, then you would have activated the law of tradition that will automatically suspend the power of God in your life.   This is why you find yourself paying your tithes, giving to the poor, forgiving others and doing everything that you know to please God but everything seems blocked, suspended or held up for you. Well, my friend, consider the intent of what you’re doing, is it based on your Pastor or leaders personal non-biblical belief that you hold fast to or is it the gospel of Jesus Christ which is the power of God?

At the end of the day, the most secure way to ensure bondage on any people, especially those that believe that they are free is to covertly or overtly implement traditions. This will ensure non-progress, lack of vision and massive frustration. This will always be evidence of either one person or a particular group in that organization benefiting while the others suffer.