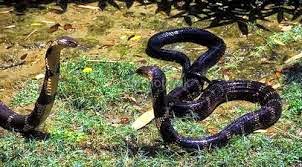 Before I call it a night, let me just share with you a dream someone submitted to me for interpretation that we will use as a teachable moment.
"Minister Ewing! I had a dream last week, and in this dream, I was standing in a house which seems to be a dining room. This dining room has a glass sliding door, which I could see clearly outside. The door was closed, and again I was just standing observing the outside, the view appeared to be the backside of the house. All of a sudden, I saw a very long black snake slowly creeping towards my direction. It would seem as if the snake thought I did not see him and did not realize that this closed sliding door separated myself from the snake.
Just as the snake was slowly rising to make his attack at me (again he's not aware that this sliding glass door is between us) another bigger snake darted out of the same bushy area that the first snake appeared from and locked its mouth on the head of the first snake. Both snakes began to twist and turn right in front of me violently. Again, it seems as if both of them were not aware that I was watching all of this, the dream ended. Minister Ewing! I will be honest with you, this seems to be a silly dream to me, but I know based on your knowledge you will come from left field with detail revelation to what may appear to be a silly dream to me. Thank you in advance for your revelation.
My Interpretation
===============
My friend, believe me when I say to you that this dream is far from silly and as you are about to see the dream is about to reveal what will become of your enemies and your front row seat in watching it all happen.
Firstly, the snake represents wickedness, witchcraft, and crafty enemies. In this particular dream snakes specifically, symbolizes your enemies. The sliding glass door represents not only the invisible barrier that God had between you and your enemies that allowed them to only come so far in your life. But simultaneously your view of the snakes through the sliding glass door also represents the future view of what will become of those enemies, and that is, those enemies that conspired against you will eventually turn on each other for no reason at all. Looking through glass is symbolic of seeing future events. Further, the backside of the yard represents things of the past. So, in essence, you are viewing the future of your enemies of the past that have conspired and plot against you.
You are standing and observing this event also indicates a position of power and authority for you while watching your enemies violently ambush and fight against each other.
To lend biblical support to this dream in 2 Chronicles 20, scripture records that Jehoshaphat along with the children of Israel was challenged to war by three nations, which were the children of Ammon, Moab and Mount Seir (their enemies). Scripture goes on to say that Jehoshaphat feared and set himself to seek the Lord and proclaimed a fast throughout all Judea.
Consequently, the children of Israel along with King Jehoshaphat fasting. Scripture said that the spirit of the Lord came in the midst of the congregation and rested upon Jahaziel. Jahaziel, while under the influence of the Holy Spirit said, "Ye shall not need to fight in this battle. Set yourselves, stand ye still, and see the salvation of the LORD with you, O Judah and Jerusalem: fear not, nor be dismayed; to morrow go out against them: for the LORD will be with you, 2 Chronicles 20:17".
The Bible clearly stated that the next day the children of Israel began to rejoice because of the word of the Lord. This was done via praise and worship unto God. God, in turn, sent ambushments against the children of Ammon, Moab and Mount Seir. Amazingly in 2 Chronicles 20:23 it specifically said that the children of Ammon, Moab and Mount Seir who initially conspired among each other to attack the children of Israel literally turned among themselves and utterly slain each other until none of them were left alive.
This is an excellent and encouraging dream; you must now come in agreement with what God desires to do in your life so that there will be no interruption or delay in its manifestation. I am excited for you, and I know God will have already set your table in the presence of your enemies.

Written By: Kevin L A Ewing
kevinewing@coralwave.com
kevinlaewing.blogspot.com
at April 01, 2015 No comments: