Understanding the dreams you dream! Part. 8-Limitations and Setbacks! 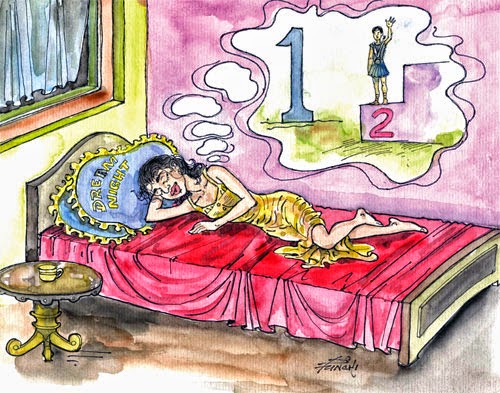 Many folks are confused as it relates to where they are in life right now. More so for the Christians, he or she feels as if they should be much further than they currently are, especially if they're doing everything that God has commanded them to do.

In our teaching on dreams today, it is my desire to isolate and focus on an overlook area of our dreams, which are indicators of the source of limitations and setbacks in our lives. Now, having said that, have you been having dreams where the setting of your dreams places you at a former residence? Such as your parents’ home, the home of your grandparent’s friends, a former apartment, job, state, island, country etc. What about dreams where you're dressed in your former elementary or high school clothes or you see yourself wearing uniform from a former job?

Such dreams are revealing to the dreamer the source of their consistent every day delays, setbacks, repetitious failures and disappointments. If analyzed carefully, these dreams usually occur, when something good is about to manifest in the dreamer's life.  For example, let’s say next week someone had promised to loan you some money. Then all of a sudden you had a dream where you saw yourself at your old primary school, high school or former college. Well, as with my previous examples such as your former grandparents or parents’ home, these former places and environments represents areas you've covered during the course of your life. So to dream of yourself being in these former places clearly indicates that there are spirits of setback and delay pending or currently operating in your life.

Again, such dreams MUST be cancelled upon waking to avoid manifestation in your everyday life. The dream gives one the opportunity to change pending events from its origin, which will always be spiritual. Scripture reminds us that God will not allow nothing to happen in the earth unless he reveals his secrets to his servants the Prophet. Now you may say that you're not a prophet so this doesn't apply to you. Well, let's see what scripture has to say about identifying those that have a prophetic calling on their lives. "And he said, Hear now my words: If there be a PROPHET among you, ithe LORD will make myself known unto him in a VISION, and will speak unto him in a DREAM! Numbers 12:6. If you are a dreamer my friend, then it is clear that God has called you as a Prophet.

Another aspect of such dreams; the dream could be indicating that something from the past is controlling currents events of the dreamers life. In other words something or someone of the past has program the dreamer to fail, to be depressed, to not get married, a particular sickness, poverty etc. a perfect example of this principle would be found in Judges 6. In this particular chapter the children of Israel were suffering great oppression from their enemies. Things got so bad that the children of Israel cried out to God. In an effort to condense this story, scripture tells us that Gideon was instructed to go to his Father’s house and destroy his Father’s altar (Demonic altar) and erect an altar unto God. It was only when Gideon followed the instructions given him that change came about for the children of Israel. The spiritual law in this passage of scripture is that there were demonic covenants in place that no one knew of that was causing everyone else to suffer. So, again this is emperical evidence that we are destroyed because we lack knowledge! It is what we don't know that is keeping us in the cycle of failure and non progress, however our dreams are the revelears of such mysteries.

There are folks that have a difficult time maintaining relationships or getting along with folks in general. Such people will have frequent dreams of a certain person in their past or constant dreams of their childhood residence. In most cases such dreams are revealing some trauma that took place with that person they're always seeing in the dream or the residence in which it took place, such as rape, molestation, rejection, abandonment etc. These are but a few of the root causes as to why the dreamer can not progress in their current or past relationships. Their dreams are indicating that in order to move on these issues must be addressed.

I met a young lady some time ago who at the time was recently married. She was overwhelmed by a dream she had. She dreamt that Her husband, her Mom and herself were in a red vehicle with her Mother at the driver's wheel, she sat immediately behind her Mother and her husband sitting next to her. She said that her Mother was driving with great speed taking over other vehicles, dream ended! Well, the dream was quite clear to me and I contemplated for a few seconds considering if she was prepared for the interpretation. I said to her that the dream was speaking directly to her marriage. The car represented the life of the couple however there was disorder in their union. The driver's seat of the vehicle indicates control, which her mother was positioned, indicating that her mother was controlling their marriage. The road in which she was speeding on indicated the couple's life journey that not only was her mother controlling but doing whatever pleases her and with passion (the color read represents passion and determination). The dreamer sitting in the back seat saying nothing to her mother indicated that even from her past life she always allowed her mother to do whatever she wanted to do without no interruptions on her part. Her husband, who was sitting next to her should have been sitting at the driver's wheel as the head of his family.

The husband's position next to his wife in the back seat of the vehicle also indicates that he has issues from his past of not taking a rightful role and allowing folks to run over him. At the end of the interpretation, the young lady began to weep because even though I don't know anything about her or her situation, she confirmed that everything I said was true and 100 percent accurate. Again, your dreams are always revealing the root causes of your every day situations.

So, for those of you that are having dreams of your parents, grandparents or former residence or being in the back of a car, house, back yard etc then such dreams  are clearly pointing to things of the past. Due to us having little to no knowledge of what our foreparents would have done during their life time that could have invoked a curse on the family, we must ask God to reveal and destroy all evil covenants of our forefathers or generations of the past that have knowingly or unknowingly set limitations on your life and the life of our family.

As a reminder, scripture says a curse causeless cannot come, Proverbs 26:6. This simply means there must be a spiritual legal right for a curse to run its course in any family, group, organization etc. thus, your life is limited currently because of evil covenants of the past that we're not even aware of, thus the purpose of your dreams.

These evil covenants could be where our fore parents participated in the occult/witchcraft, meaning whether they visited these folks to protect themselves, send curses to others etc. In any event whatever reason they visited them knowing or unknowing to you, an evil covenant was formed. These dreams are very serious and MUST be given serious attention because it’s pointing and exposing to the dreamer as to why the setbacks, delays disappointments and never getting ahead in life seems to be so consistent.

Please! Cancel these dreams and ask God to destroy the evil covenants originated by your forefathers in the name of  Jesus Christ, if it is your desire to go forward.