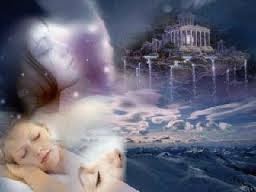 While every dream has its specific meanings, there are some dreams that we unknowingly
manufacture or produce on our own.

How is this possible you may ask? Well, most of you would have experienced at one time or the other where you were overly worried or completely stressed out about a particular matter, to the point you literally found yourself dreaming about the situation. Amazingly, the negative thoughts that consumed your mind during your waking hours literally played out at night or at whatever point you fell asleep. Here is what scripture has to say about such occurrences, "For a dream comes through the multitude of business" Eccl. 5:3.

In this particular teaching on dreams, there are a few points that I would like to bring to your attention, that will not only bring an awareness to such dreams but how the enemy is manipulating you into engaging in spiritual laws to your own detriment. In fact your agreement is covertly being secured unknowingly by using these self manufacturing dreams as a tool to secure your agreement to bring these negative relentless thought to pass.

Spiritual law clearly says to us, "As a man thinks in his heart so is he or so he becomes" Proverbs 23:7. Satan and his demonic host understands spiritual laws in fact they are very much legalistic. They understand that if they can influence you to ponder on your negative matter over and over again, then you will automatically bring that negative relentless thought to pass or you will live the manifestation of it.

Secondly, the enemy understands the spiritual law of fear and he also understands that in order for him to rule the lives of his victims he must covertly get them to participate unknowingly in this law. Here is what the law of fear reveals, "For the thing which I greatly feared is come upon me, and that which I was afraid of is come unto me" Job 3:25.

So, I am sure you have observed so far that the adversary don't operate arbitrarily instead he operates within the law and takes full advantage of those that are spiritually ignorant of spiritual laws. Therefore, it is Satan and his agents that's forcing you to not only repeat those negative thoughts during your waking hours but to eventually seal the deal during the course of your sleep.

It is such information as what I have mentioned above that the average person lacks and as a result they see such occurrences as normal behavior. It is this erroneous perception that secures for the victim his or her continuous cycle of defeat and unexplained failures in life. Again, scripture has unequivocally said that it would be through "KNOWLEDGE" that the just be DELIVERED!, Proverbs 11:9.
As a reminder, the mere fact that such dreams are not cancel upon waking from the dream will eventually become a reality.

Written By: Kevin L A Ewing
kevinewing@coralwave.com
kevinlaewing.blogspot.com
at July 06, 2015 No comments: