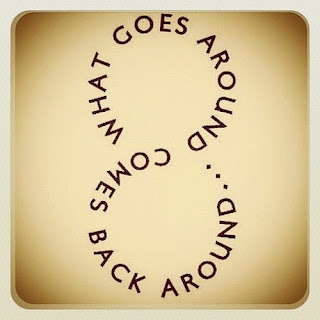 It is easy to distribute evil and unfairness to others. In fact, you can accomplish it without anyone knowing that you were the one that did it.

Nevertheless, while others may not know you were the cause of their pain, loss, disappointment etc there are spiritual laws that will eventually address the conniving, deceitful and covert evil behavior of mankind. Time and time again, I would hear the following comment is made, "Life isn't fair". The reality is life is very much fair if your assessment is based on the spiritual laws that govern life.

You see my friend, usually when such a statement is made the one that is making that statement feels as if someone or even themselves have been unjustly served in a particular matter not realizing that whoever had done wrong to them that person activated laws that will deal with them in the future. Let's observe some of these spiritual laws that others either ignore or just simply forget when planning and executing their evil:

"Whoever digs a pit will fall into it; if someone rolls a stone, it will roll back on them" Proverbs 26:27

"Even as I have seen, they that plow iniquity, and sow wickedness, reap the same" Job 4:8

"Woe unto the wicked! it shall be ill with him: for the reward of his hands shall be given him" Isaiah 3:11

"Because sentence against an evil work is not executed speedily, therefore the heart of the sons of men is fully set in them to do evil" Eccl.8:11.

The point of this post is to highlight the undaunted fact that absolutely no one gets away with evil. While they may not be punished immediately when they have done evil or it may appear as if they're continuing in it, the spiritual law dictates that such folks will be dealt with in the end.

Written By: Kevin L A Ewing
kevinewing@coralwave.com
kevinlaewing.blogspot.com
at September 06, 2015 No comments: