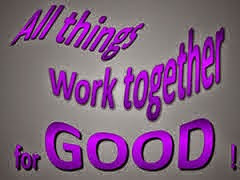 I say to folks all the time,” if you don’t learn and seek God for yourself, then any clown can give you
their version of him”
I have attended many churches and unfortunately a vast majority of them are of the erroneous belief that the bad things in life are of the Devil and the good things in life are of God. I promise you if you have been led to view life from this perspective, then I can also promise you, you’ve been missing God quite a bit.

You see my friend; it would be considered an oxymoron statement (seemingly self-contradictory), if you say to me God is in control on one hand but the Devil has done so and so on the other hand as if he can stop the plans of God. The reality is, if God is in control like we say he is (which I most certainly believe), then we must also conclude at the very least that he’s supervising whatever is taking place in our lives, be it good or bad!
To be in control suggest having complete power and authority and at minimum everything and everyone must seek your approval or permission to operate or function in whatever it is that you’re in control of.

Case and point! In Genesis 12:1-9, God not only called out Abram (who was later called Abraham) from among his relatives but God also made him a whole heap of promises concerning his seed in spite of him having no children at the age of 75 years. Now one would think that after such grand promises it would be smooth sailing for Abram, right? Well, interestingly enough beginning in verse 10 of the above mentioned chapter, things began to go south for Abram in that the land began to experience a famine (recession in today’s world). This caused Abram and his wife to go into a heathen land for support and resources.

At this point in the story most “Bible carrying Christians” would see this circumstance as the work of the Devil to hinder the plans of God for Abram’s life. Well if you continue to read the story you’ll read where what appeared to be an obstacle literally brought increase in the time of famine (recession) to the life of Abram. Question! What is it that you’re labeling as a disappointment but the reality is it’s a part of God’s plan to what he’s promised you?

You see my friend, the above biblical account is a candid example of the term, “God is in control”. Whatever appears to be disappointing, depressing, unfixable, a waste of time or constant limitations, I promise you God is indeed supervising these events all in an effort to provide good as your end result, just like he’s promised in Romans 8:28.
As a reminder, Romans 8:28, clearly states that “ALL THINGS” (suggesting the good and the bad)are  working in concert to produce good for those that love God and for those that are called to his purpose.

Whoever this understand and revelation is for today, know for sure that God is fully aware of your disappointments, constant struggles, depression, fatigue, confusion and most of all your frustrations. However, God wants you to know that even though it seems as if the Devil is working against you like in the case of our faithful brother Abram, know for sure that the reality is, because God is in control Satan and his cohorts are unknowingly working for you to bring about the will of God as it relates to your life.

God said to remind you and that you must ponder his word that says, “IN EVERYTHING (GOOD AND BAD) GIVE THANKS; FOR THIS IS THE WILL OF GOD IN CHRIST JESUS FOR YOU! 1 Thessalonians 5:18.
This setback is just a setup for your comeback…………


Written By: Kevin  L A Ewing
kevinewing@coralwave.com
kevinlaewing.blogspot.com
at December 10, 2013 No comments: